What is the process for getting a single-use bag by-law in place? Sean, then a high school student, tells of his experience.  in this 2011 article.

Sean Graham is the driving force behind the Single-Use Bag Bylaw that came into effect in the Regional Municipality of Wood Buffalo yesterday.  He kindly provided the Environmental Law Centre with the following account of his experience participating in the creation and development of the bylaw. Many thanks to Sean for taking the time to write this informative and inspiring post about how citizen participation in law-making processes can help protect the environment.
On December 8, 2009, after eighteen months and five Council meetings, the Single-Use Shopping Bag Bylaw was adopted by the Council of the Regional Municipality of Wood Buffalo (RMWB).  Over two years ago, subsequent to being shown a documentary on shopping bags in social class, I concluded that the idea of living in a single-use shopping bag free community was not only environmentally friendly, but entirely feasible as well.  I decided to present the idea to the Municipal Council, and to advocate for a ban on single-use shopping bags.  My peers and I agreed that it would be extremely advantageous to have a petition that supported the cause, and thus, spent a class period gathering signatures a few days later. I continued gathering signatures over the summer, during which time I acquired 1,868 signatures from local residents (for a total of 2,268 signatures) and the support of 9 local businesses.  On August 26, 2008, I presented the petition and the information that I had obtained about the issue to Council; the result of which was a referral of this information to the city administration for review.
Without the petition, Council would have received my presentation in one of two ways: either they would have wholeheartedly embraced the idea, or they would have disagreed and determined it to be an unpopular brainchild of one individual out of tens of thousands. In other words, I would have been leaving the outcome of my presentation almost entirely to chance. Conducting the petition removed a substantial amount of the probabilistic quality of the situation, which was the most significant benefit it provided, as if the outcome of my presentation would have been left completely to chance, Council would have most definitely received my presentation in the negative.
As a result of the review, a report was written that suggested not to pursue legislation in an effort to resolve the problem. The report appeared before Council on March 10, 2009. During that meeting, I presented my opinion, along with more information on the issue, and, after a lengthy debate, the report was turned down. In its place, Council adopted a motion that read, “That Administration proceed with drafting legislation and establishing a budget to ban plastic shopping bags to be implemented by Council within 2010.” Almost eight months later, on October 27, 2009, the first draft of a bylaw to ban plastic shopping bags was presented to Council for its first reading. In the RMWB, debating is not permitted when a bylaw is read for the first time, thus, both the public and council must wait until the second and third readings are scheduled to occur before they can enter such dialogue. The second and third readings were scheduled to occur on November 24, 2009; however, on the evening of November 24, the debate that transpired caused a deferral of the bylaw to the meeting of December 8, 2009. The reason for the deferral was a “change” that I strongly suggested be made to the bylaw.
During my initial presentation to Council, I stated that reverting to paper bags would cause the opposite of the desired effect to occur. (When compared to plastic bags, paper bags require 40% more energy to manufacture, and create 70% more air pollution and 50 times more water pollution during their production.)  Unfortunately though, Council did not address this fact when they gave their administration direction to draft a bylaw, resulting in a paper bag friendly piece of legislation.  Therefore, before the second reading was to take place, I restated my opinion on the paper bag issue, and as a result, an amendment to the bylaw that would rectify the problem was proposed.  The discussion that followed this event, however, led to the approval of a deferral of the bylaw to December 8, 2009.  The majority of Council felt that it would have been unfair to adopt the bylaw with the amendments that evening, as the amendments were not known to the public early enough for citizens to be able to respond.
I presented to Council yet again on December 8, 2009, and despite all of the delays and elaborate discussion, the bylaw and all of the above amendments were approved by the council of the RMWB. At the moment, the RMWB is the largest community within Canada to establish such legislation, and to the best of my knowledge, is the only community in the world to ban all single-use shopping bags. According to the bylaw’s definition, a single-use shopping bag is a bag that is primarily used to transport goods from an establishment to the home of a consumer, and that is made of less than 2.25 millimetres thick plastic (including biodegradable plastic) or any thickness of paper.  Once implemented, the bylaw will prohibit all establishments (except liquor stores, pharmacies, and restaurants) from providing their customers with a single-use shopping bag. This will divert between 10 and 40 million shopping bags (which is approximately 64,000 to 257,000 kilograms of plastic) from the landfill annually, therefore reducing the negative effects sustained by the environment due to the creation, use and disposal of shopping bags.
Posted by Bag Monster at 6:15 AM 1 comment: 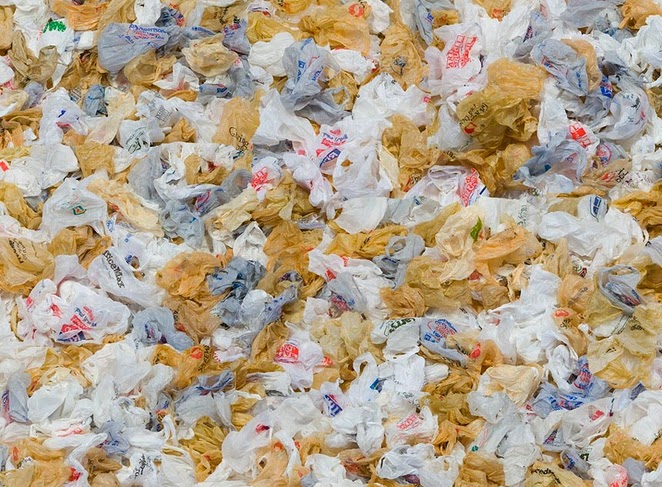 Los Angeles rang in the 2014 New Year with a ban on the distribution of plastic bags at the checkout counter of big retailers, making it the largest of the 132 cities and counties around the United States with anti-plastic bag legislation. And a movement that gained momentum in California is going national. More than 20 million Americans live in communities with plastic bag bans or fees. Currently 100 billion plastic bags pass through the hands of U.S. consumers every year—almost one bag per person each day. Laid end-to-end, they could circle the equator 1,330 times. But this number will soon fall as more communities, including large cities like New York and Chicago, look for ways to reduce the plastic litter that blights landscapes and clogs up sewers and streams. 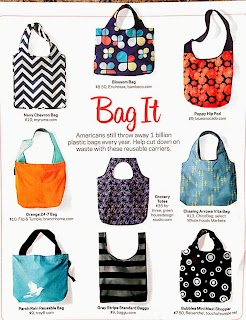 Choose to reuse.
There are great reusable bags everywhere!

Since Feb. 1, 2011 all stores in NWT
charge 25 cents for single-use bags,
which goes into an evnironmental fund.


Here are some interesting reusable bags
the NWT has been promoting. 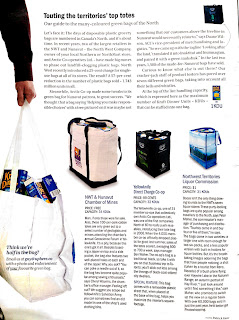 Posted by Bag Monster at 5:43 PM No comments:

These and more communities are banning plastic (polyethylene) single-use bags from being handed out in retail stores. Communities all have the same initial responses: grumbles from people not wanting to change, concerns about germs, and concerns about shoplifting.

But communities around the world continue to have huge issues with overflowing landfill, and are passing single-use plastic bag bans as a way to reduce waste.

Fort McMurray remains a leader by banning all single-use bags - those made of paper, biodegradable and compostable fibers as well. This is because they don't compost in a landfill situation, where waste is piled so deeply that the organisms that do the eating and composting can't survive.

Have we move beyond the single-use plastic shopping bag? (iStock)Toronto city council surprised everyone, including the mayor, when it voted to ban plastic bags outright by 2013.

Mayor Rob Ford introduced a motion to eliminate a mandatory five-cent fee the city brought in three years ago. The motion passed, but so did another to eliminate plastic bags entirely by Jan. 1, 2013.

Toronto isn't the first Canadian city to ban single-use plastic bags. Fort McMurray, Alta., banned the bags in 2010. Tofino, B.C., has had a voluntary ban on plastic bags for years.

Los Angeles, San Francisco, Portland, Seattle and Hawaii have all banned plastic bags in the U.S., as have countries such as Italy, Bangladesh, Ethiopia, Rwanda and the Republic of Congo.

And certain retailers don't offer plastic bags at all, including Thrifty Foods in B.C., liquor stores in Ontario and Ikea stores in Canada, the U.K. and elsewhere.

A federal private members' bill tabled in 2010 proposed that Canada should ban plastic shopping bags, but it was defeated.

As of July, 2015, Hawaii will become the first U.S. state to bar the "modern day tumbleweed" known as disposable plastic bags. 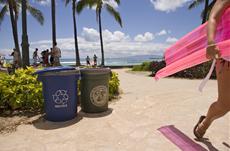 A beach goer holding an inflatable raft walks past a set of trash can set on Waikiki, in Honolulu. Effective Jul 15, 2013, Hawaii will become the first U.S. state to have a statewide ban on sales of single-use plastic bags at checkout.
CAPTION
By Marco Garcia, AP

Honolulu's restrictions passed after a two-year campaign by the Sierra Club, an environmental group, and come as the Scripps Institution of Oceanography reports that the amount of plastic debris in an area of the Pacific Ocean known as the "Great Pacific Garbage Patch" has grown a hundredfold over the past four decades.

bans non-biodegradable plastic bags at checkout as well as paper bags that are not at least 40 percent recycled. Retailers in Honolulu County have until July 1, 2015, to make the change.
That date "gives us plenty of time to get ready," Carlisle told msnbc.com. "Retailers will be able to use up their inventory of bags and make arrangements to educate the public on the importance of bringing their own bag."
Kauai and Maui counties already enforce bans, while Hawaii County's ban takes effect on Jan. 17, 2013.

Last month, meanwhile, SeaWorld announced it will eliminate plastic shopping bags at its 10 theme parks within the next year. An estimated 1.4 billion tons of trash, including plastic bags, enters the ocean each year. Marine animals such as sea turtles often mistake plastic bags for jellyfish, one of their favorite foods.